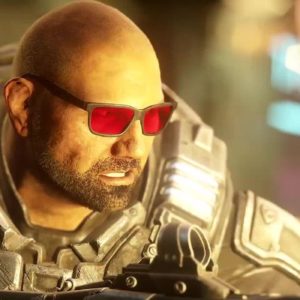 Nice surprise for Gears lovers: Dave Bautista, the actor who plays Drax in Guardians of the Galaxy, will be the Marcus Phoenix skin in the next update of Gears 5. The arrival of Bautista in Xbox’s flagship game is a return from fate: the actor was tricked into playing Marcus Phoenix in the film adaptation of Gears … which was never produced. In fact, Bautista has been available as a playable character in Gears since 2019, but this time it has taken a new level. Note that in addition to the skin, Bautista has also re-recorded Marcus’s voice passages.

In addition, you need to know more about it.

Dave Bautista will be available in the November 10th update, an update that also includes the new Game +, new difficulty levels, skins, and the Hivebusters DLC, which can only be played solo. Of course, Gears 5 will also be compatible with the Xbox Series X via SmartDelivery and will occasionally benefit from 4K display, 120 fps and high-resolution textures.

The PlayStation 5 is “available” in France

LALAL.AI: The perfect online tool for extracting instruments and vocals from a sound source