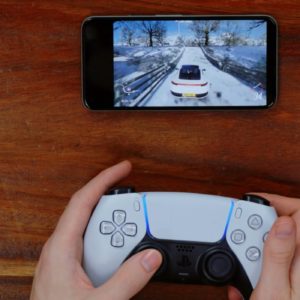 We get a preview of the PlayStation 5 DualSense controller. YouTuber Austin Evans offers an unboxing and introductory video. He, other YouTubers and journalists received the PS5 today for them to test out.

Austin Evans did not test DualSense on the PS5, but on other media. He was able to connect the controller to a Windows 10 computer (Surface Laptop Go) and the buttons are recognized. He could also connect the controller to an Android smartphone (Pixel 5). The connection is wireless and everything works normally, including menu navigation. Thanks to Microsoft’s xCloud service, YouTuber was able to stream the Forza Horizon 4 game on Pixel 5 as well. He says that the controller has no vibration or haptic feedback. This will only be available with the PS5.

For those with a Mac or iPhone, the controller should work normally too. But this was not shown today.

Another test was to connect the DualSense to an Xbox Series X and a PS4. The controller is not recognized on the Microsoft console. But at least it gets charged. On the PS4 side, the controller will charge when it’s connected to the cable and the microphone detects noises. But the buttons don’t work. The controller can also establish a wireless connection, but the buttons do not respond here either.

The video also includes an outline of the DualSense. We learn that the controller’s battery is 1560 mAh. Sony also added two microphones (one in the front and one in the back). The microphone on the back can be a microphone to reduce noise. In terms of the actual dismantling, it is not easy. The real problem is removing the shell from the controller.

[#BonPlan] The high-tech promotions of October 23

Songbird, the film about a COVID-23 pandemic, sets the web on fire (trailer)